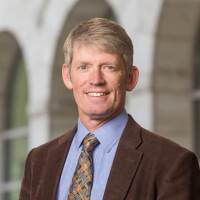 Professional Activities:
George B. Handley has taught at BYU since 1998 where he is a Professor of Interdisciplinary Humanities. He served as chair of the Department of Humanities, Classics and Comparative Literature from 2012 - 2015 and served as Associate Dean of the College of Humanities from 2015 - 2018. His current appointment is Associate Director of the Faculty Center at BYU and he has been elected as a Provo City Council Member for District 2.

Handley's works include Home Waters: A Year of Recompenses on the Provo River (2010), New World Poetics: Nature and the Adamic Imagination of Whitman, Neruda, and Walcott (2007), Stewardship and Creation: LDS Perspectives on the Environment, Postslavery Literatures in the Americas (2005): Family Portraits in Black and White (2000), and American Fork (2017).

He and his wife Amy have four children and live in Provo, Utah.